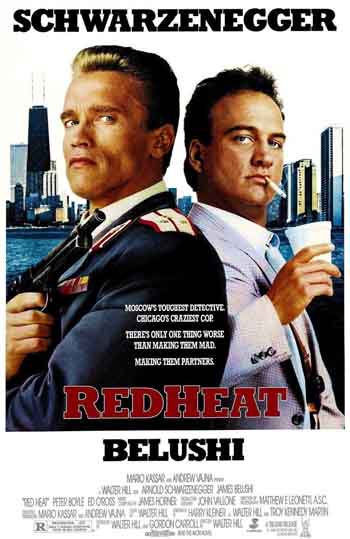 Story… A tough Russian policeman is forced to partner up with a cocky Chicago police detective when he is sent to Chicago to apprehend a Georgian drug lord who killed his partner and fled the country.

Walter Hill is an underrated guy. He kind of single-handedly created the cop buddy genre with 48 hours and Red Heat. Arnie’s best days are long gone (they probably ended with Twins and Total Recall), but here, he gets to shine, maybe because the character of Danko perfectly matches his sometimes “wooden” performance. It’s definitely one of his strongest roles. Ed O’Ross is also brilliant as Danko’s counterpart and although only has a few scenes, he owns them. Usually, he plays funnier characters (even in Moonlighting or Full Metal Jacket, his characters seem a bit tongue in cheek), but this is probably the strongest role I remember him in.

The movie oozes atmosphere. The rainy weather, the streets of Moscow(Budapest), the great soundtrack by James Horner…sure, it’s a movie that has clichés and the story is nothing extraordinary, but the movie works well and is entertaining every time, even if you know what’s going to happen. There’s just something about basically making this kind of a Soviet affair in American land. Highly recommended.