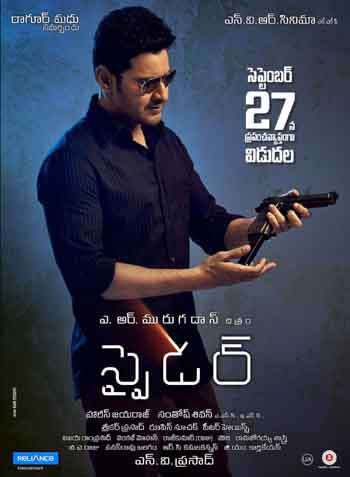 Story… An intelligence officer attempts to save the city from a psychotic serial killer who kills people just to hear their loved ones cry.

Mahesh Babu has nailed it with his bilingual. Superb story and a grippy screenplay is the crust of the film. Mahesh Babu, acts as an intelligence bureau officer whose motive is to help the innocent before any mishap. But one such case, a mysterious one, forms the crust of the story. The expectations created by the first half is let down by the second half. Ineffective romantic portions and logical lapses in fight sequences had slowed down the pace.

Even though such lapses are present, they could be overlooked for the sake of SJ Suryah, the main antagonist. His role is effective and at times reminds us of the JOKER in The Dark knight and the film also contains a similar interrogation scene. The villains past aka flashback is not a cliché and is convincing. The heroine is the weakest of characterisations in the whole of the film containing little screen space. RJ Balaji too doesn’t have much scope in his character.